Since we can't order pizza out anymore due to Cameron's food allergies, we now have to make our own! A BIG thank you to my mom and dad for getting us the bread machine. it was a HUGE help with making the dough! So I said it was from scratch, but to be fair, I mostly meant because we made our own crust. This time we did not make our own pizza sauce and I don't think I will ever make cheese.... ever.

Here is our 2 large Whole Wheat Pizzas! Ours in a Veggie and the kids is Pepperoni (if I had my way it would have been veggie too, but daddy trumped me on that one). I put cheese over a lot of our veggies, so there is actually a lot on there, you just can't see it well lol. We learned a couple of things to tweak it for next time. I do have to say though, for our first time making completely homemade pizza, including the dough, it was EXCELLENT! They aren't too bad looking either! ;)

We made a whole wheat crust which is soy, barley, buckwheat, rice and even gluten free. The pizza sauce is Muir Glen Organic Pizza Sauce. We used Sargento Shredded Mozzarella and Kraft grated Parmesan Cheese. Then of course there were fresh veggies and some pepperoni. We sprinkled Oregano and Basil on top of the pizza as well as lightly brushing the veggie pizza crust edge with olive oil. 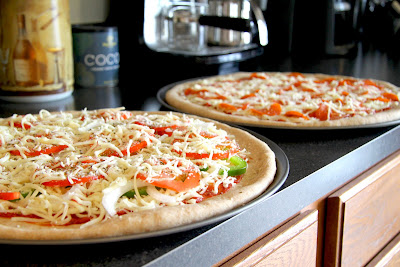 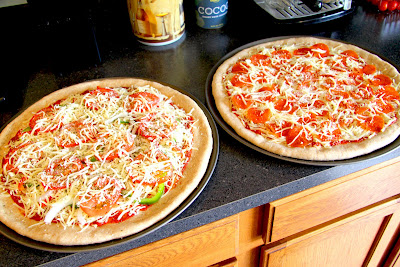 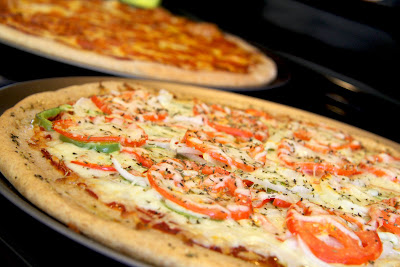 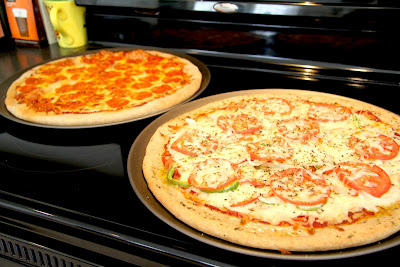 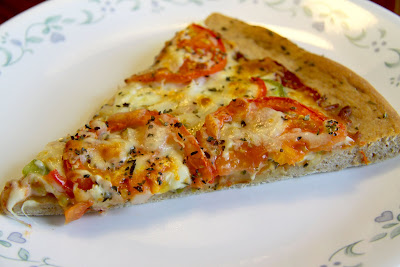 That looks so yummy! GREAT JOB!!!

oh... your pizza's look YUM... will you share your recipes?