Random-ness from the past week!

I'm just letting my brain spew for a few minutes here.
One day in the middle of last week Alex came downstairs all proud of himself, holding something to show my husband. He walks into the kitchen where my husband was and I hear him say "Look daddy! My lego guy has a big penis!". Now let me tell you, this is not one of my proudest moments... but I did kind of laugh to myself. He had added an extra part between the sections of the little lego man's body to make it look like he had a big penis. My husband went on to explain to him that it was a bit inappropriate and why. He's creative, I'll give him that much!
Yesterday, while I was getting dressed for us to all go grocery shopping the 4 boys were in the playroom. I was listening to them like I usually do and they decided they would turn the entertainment center into a TV, that they were inside of (picture below). They were "filming" the "Maury Williams"show. That in itself I found amusing, but then listening to some of the things they were saying on the "show" had me hiding around the corner in my bedroom, giggling at them. One at point I heard Wyatt say "My baby is fat!" (Perhaps the very rare occasions I have had Maury on, he was paying attention to it!) And Alex... Silly, silly Alex. I heard him saying "Up next, parents and their bad kids!" "My son is a bad kid, a really bad kid! He made a lego man with a private part and I punished him for a week!" (Let me mention this now... we never told him he was a bad kid when he did that! Nor did we punish him! lol). When I heard that I couldn't help but laugh.
My boys are such... boys, sometimes lol. 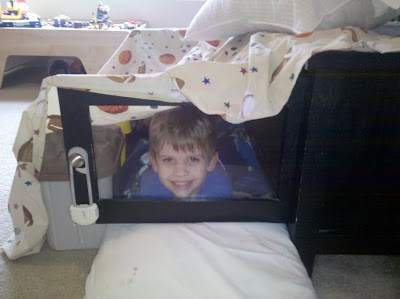 Lets not forget what is now known as the "balls" incident! *Here is my TMI warning!*

On Thursday, while doing my hair in the bathroom, my husband was getting out of his uniform and sat on the edge of the tub in his undershirt and boxers, behind me while we talked. I hadn't really looked at him other than the reflection of his upper body in the mirror. Zayne walked into the bathroom and was talking to daddy, then all of the sudden squatted down and was STARING at something. Tony looked down and said "Zayne, what are you staring at?" and at that moment realized there was a hole in his boxers and his balls (Yeah yeah, we are so NOT PC when it comes to scrotums... they are "balls" here. But otherwise genitalia are Penis and Vagina) were completely HANGING out. We both started laughing so hard, I almost couldn't breathe! Maybe you had to be there... but it was so freaking hilarious to us. There is always something going on in this house!
on Monday, August 02, 2010