The ER, Urgent Care and Starting Over

Last night we had a bit of a scare with Cameron. He broke out in terrible huge welts all over his mid section, thighs and neck. They progressively got worse pretty quickly. Tony took him to the Emergency Room and they were quick about taking blood, getting him on an IV, heart monitor and giving him meds to get control of the allergic reaction he was having. He was given Prednisone, Benadryl and Pepcid. The Pepcid spiked his heart rate to 165 and made him feel really sick. After they gave him meds for nausea and got everything under control over the next few hours he started to get better. After spending the night in the ER, he was discharged early in the morning with a prescription for Prednisone, Benadryl and an Epi Pen.

This afternoon Cameron's face started to break out in welts. I gave him both the Prednisone and Benadryl as instructed. Within an hour his whole face was swollen in welts and it was spreading quickly all over his whole body, so Tony brought him to Urgent Care (Nasan Medical, which is an AMAZING clinic!). He was again put on an IV, medicated, put on a heart monitor etc. We do not know what is causing this severe allergic reaction. The Dr. at Nasan suggested it it may be the second stage of his allergic reaction from the day before (I've never heard of that, but I'm not a Dr. so... who knows) which we think could possibly be a mustard allergy. They got control of his reaction, like they had the night before in the ER and discharged him after him spending the afternoon in their clinic.

This whole situation breaks my heart and frustrates me at the same time. My heart breaks for Cameron. He has been stuck with so many needles and pumped full of medication the past 2 days. I am frustrated because we don't know what caused this reaction. And VERY frustrated because his allergist (National Allergy, Asthma, & Urticaria Centers Of Charleston, P.A. - Patricia S. Gerber, MD.) is terrible (in my opinion) and has completely blown his allergies off. She has been so dismissive and very NON-proactive about everything, that we were already requesting a new Allergist before this mess happened. All of the tests they have done we have had to request. They did not even bother to run a blood allergy panel without us requesting it. They are the specialists, we shouldn't have to ask them to do their job. This whole severe mystery allergic reaction solidified to us that looking for a proactive allergist is the right choice. Not to sound dramatic, but my son could have died. He was close to going into anaphylactic shock. Things could have been so much worse and we don't even know if this is over yet. It's scary. I'm scared for him.

As much as I dread adding any more to Cameron's laundry list of allergies, we NEED to find out what is causing this as soon as possible. This is the most severe reaction he's ever had. This is dangerous. We need to start over completely with a new allergist and all new allergy panels.

This was Thursday night when the welts started. It become much worse than this. Today, his reaction was worst than the first night. 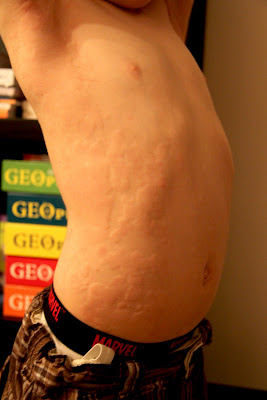 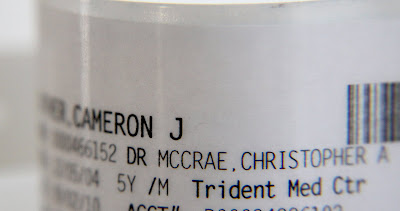 Allergic reactions can have two stages. That's why you're supposed to go to the ER after using an Epi Pen to receive more care and observation in case that second wave is really bad.

Well, Cameron is apparently on a third wave right now... :(.