For a while now I've been seriously considering adding a foreign language to the kid's homeschool curriculum. Recently I became more serious about it and my husband and I decided on Spanish. We knew we wanted to add it sooner than later because the younger they are, we know the better they will pick it up. We decided we wanted to get Rosetta Stone, specifically the homeschool program and I started to make a little savings for it. When I found out it was on a decent sale, I scrambled to get it before the price goes back up! Thanks to some family chipping in, we were able to get it! The kids and I are pretty excited! 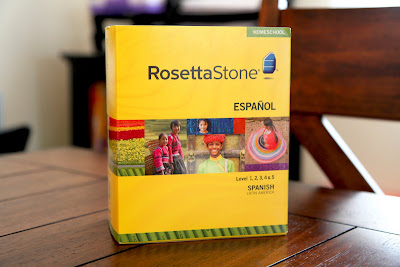 I really think this will be a good investment in their education and future. I would love for them to become fluent and maybe even move on to other languages as they get older! Becoming multi-lingual would be amazing. I wont get too crazy yet though, we'll take it slow with Spanish and go from there ;). I think adding this into the regular curriculum and keeping it fun, will give them great odds of picking it up well though!

I have it all installed and set up for each of the older 3 boys to start tomorrow. I'm just a little bummed that it can only be installed on one computer. I guess they'll just do their lessons 1 at a time while the others are doing other work :).

That is awesome!! We bought the Latin edition of this and Zach LOVES it. In fact, we reward him after having good behavior during the school day with.... MORE school!! lol

That's wonderful! Feel free to have them practice with me if you would like :)
I'm so impressed how Gio know a lot of words in English, Spanish and Italian! They are sponges!

That's so great Shaky! I wish I were fluent in another language so I could have started the kids right from babies speaking more than 1.