This afternoon and evening, I made mini cupcakes for my husband's command Christmas Party tomorrow night. I wanted to bring something my son with severe food allergies can have because I know he'll likely not be able to have anything else there. Coming up with a 100% soy, dairy, egg and nut free cupcake (as well as barley and rice free), from cake to frosting, was a bit of a task. The cake itself, was a breeze. I had gotten a recipe from a friend, who got it from her grandmother a while back and then realized it was the same recipe my grandmother has made for as long as I can remember. I don't know the origin of the recipe, but I joking named it "great depression cake" because it's ingredients are limited, simple and inexpensive. So the cake, already fit what I needed as long as I used the right flour! The frosting took a little bit more effort. I had to change a couple of basic recipes and it worked out surprisingly well. 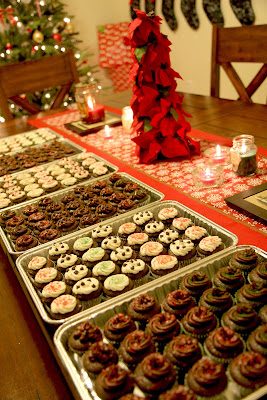 Chocolate Cake: (My 92 year old Grandmother has always called it "Wacky Cake". I think it's because she doesn't thoroughly mix the ingredients so it comes out kind of.. wacky.)

3 cups of flour (I use Gold brand Organic flour because it does not have barley, which my son is also allergic to)

To check if their done, insert a toothpick. It should come out clean. 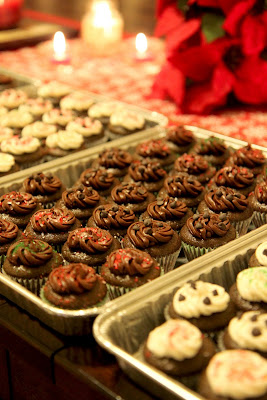 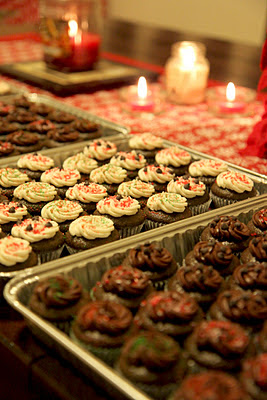 1 cup of soy free shortening OR earth balance soy free buttery spread (lightly heated, but not melted. Should be like ice cream.)

The mini chocolate chips you see in the pictures are Enjoy Life brand. They are dairy, soy and nut free chocolate chips! I've only ever been able to find them at Whole Foods. They are even hard to buy online.

The cashier at Target, asked me about my Vagina.

Yup, the cashier basically asked me about my Vagina.

Our trip to Target today left me with 2 things. I was reminded just how awful people can be and I have also come to the realization that Target doesn't always hire the best employees. This isn't my first issue with Target, which makes me sad. As I've said before, we go to Target at least weekly and I actually like going there, or I did at least. I am seriously considering finding somewhere else to shop after today.

Today we went to the Target in Waterford, CT, which is the closest one to us, to finish up Christmas/Christmas Party/Birthday party shopping. When we were done shopping, we went to checkout. I went to a register a few lanes over from my husband because I was buying a few small stocking stuffers for the kids and didn't want the older boys to see them. He was with the older 4 boys and I had the little ones with me. The cashier was someone I have seen just about every time we've been there. She looked at the cart with Annabella in the seat and Declan inside his carseat in cart. She commented on having 2 little ones and it being a lot. I smiled and told her those were my 2 youngest and my husband was checking out a few lanes over with my other 4. She immediately looked horrified and said "You have 6!?" I smiled again and said yes. Now, her looking horrified, I'm totally used to that. I see it a lot when people realize I have a lot of kids. However, one thing she said, I have read online SO many times and heard endless jokes about it, but of all of the rude comments I have gotten, I've never had anyone actually say or ask this in person. First she said "Wow, that's a lot of babies to be having." and THEN said "So, is it true that they can just walk right out of there after having like 4?" What!? Did she REALLY just ask that? She just asked me about my Vagina! This isn't even one of those questions they expect an answer to, no. This is one those haha you have a lot of kids so your vag must be so loose and floppy kind of questions. My usually quick witted and sarcastic self was so completely floored by the ginormous balls this girl had, that I was unable to come up with anything at all. In fact, it took a few seconds before I picked my jaw up off the floor and was only able to answer "No... it's not quite like that after having many babies...". She just got a cocky little smirk then told me I looked too young to have that many kids. I told her I am not as young as I look and walked away to meet my husband who was finishing checking out.

I was so absolutely floored that she actually said that to me and with another customer right there to boot! I went from floored, to embarrassed after we had loaded the kids up in the Econoline and were leaving. My husband turned around and went back to talk to the manager because the more we thought about it, the more it fully clicked that what she said was not ok. We are really easy going but she is a cashier that doesn't even know us and to top it off, she clearly wasn't trying to joke with me. We weren't having a friendly conversation  about having babies or anything or the sort. What she said was vulgar and inappropriate.

My husband went back into Target and spoke to the manager, Bradley Sher****. The manager said "I usually like to give people the benefit of the doubt, but that comment was pretty clearly not taken out of context." He agreed it was inappropriate etc. and told my husband he would "talk to her about customer service". That's it? I don't even know what I was expecting or hoping for... but... that's it. I feel wronged, I kind of feel violated and I certainly am embarrassed.

Are Target employees not trained about sexual harassment and inappropriate behavior? Heck, maybe I'll ask my ex husband, he's worked there before. Aren't they made aware that making crude, rude, vulgar or otherwise discriminatory comments to customers as well as co-workers is not ok? I just don't think it's ok. I feel as if it would have been a bigger deal if it was a racial or religious comment she made. It's the same to me. "So, is it true that Asian people <insert ridiculous offensive stereotype here>?" or "So, is it true that when you're Catholic <insert ridiculous offensive stereotype here>?" I feel discriminated against. She singled me out because I am not within the "norm" and have many children. She made a rude and offensive comment because of my "minority", if you will. Lets add the element of it being a veiled reference (and insult) to my vagina. That could fall under sexual harassment. She not only said what she did to me, but in front of another customer as well. That embarrasses me and makes me feel belittled for having many children, that much more. This wasn't a friend joking around with me, this was a Target employee who I do not know at all. I can joke and be crude, rude and sarcastic with the best of them. But what she said, in the setting she said it in, was just too much. Never mind the fact that she was obviously not trying to just be playful and failed miserably. She was just being blatantly rude.

I am not sure what I am looking for here. I just don't feel like it has been adequately handled. I feel... violated.
on Saturday, December 10, 2011 6 comments: