My Daughter just might be the death of me... If nothing else, this girl is going to really be something special.

Annabella is the most determined child. It's both adorable and frustrating at the same time. At 27 months old, when she has her mind set on something, it isn't exactly easy to change it. The other night she sat down on the couch, put the boppy on her lap, lifted up her shirt and demanded that she breastfeed her baby brother. We tried to explain that only Mommy could breastfeed him and that she could breastfeed one of her babies. That just wasn't good enough for her. We went ahead and put Declan on the pillow and when he wasn't interested, she looked at my husband and I and said "He doesn't want it." very matter of fact like. At least that was enough for her to let it go lol.


Future Blackmail... This was her telling Daddy to give Declan to her so she could feed him. 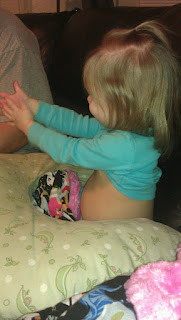 This little girl is already VERY vocal when it comes to what she wears and her hair. She loves pink and anything  girly. She has to have her hair clips in... She has to have the shoes she wants on... It's cute but drives me crazy.


As girly as she is though... Tonight before bed, she stood in front of the toilet, holding herself, trying to pee like her brothers. Oh boy.
on Wednesday, February 15, 2012