Hold your horses intactivitsts.... This is NOT about circumcision. Carry on.

I am speaking of my soon-to-be 4 year old son's hair. It has not been really cut since early September. It is getting long. The longer it gets, the prettier the big spiral curls get. I ADORE it. He could use a trim, but I really don't want to CUT it off. Despite him being dressed in very boy-ish clothes, wearing very boy-ish shoes and him not having any bows or the like in his hair, while standing along side his sister all decked out in pink with bows... people still call him a girl. I feel kind of bad when people call him a girl, but I really don't care that much. He is a handsome little boy and the hair really fits the rock star that he is. It's crazy and messy and adorable. Him being referred to as a girl isn't enough of a reason for me to chop it off. I love his hair so much that I even had a nightmare that my husband went and had it cut off really short!

I have to decide if I will ever be able to bring myself to cut it off. I think ideally, I'd like to keep growing it and when he's old enough to want it cut off (if he does) donate it to Lock of Love. Hmmm. 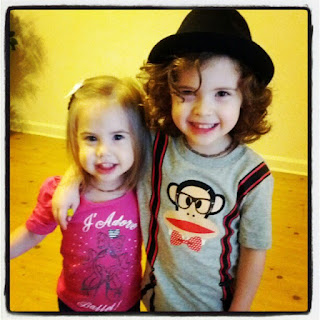 Would people thinking your son was a girl be enough of a reason for you to cut his hair?
on Tuesday, June 19, 2012

Absolutely not. He looks adorable. Besides, if you listened to what other people were saying, how many kids would you have stopped at? =P Would you still home school? You are strong enough and wise enough to know that you can't base your decisions off of what others say.

Yeah, I really don't care about what other people think LOL.

My son has had a military cut since he was two, lol. He loves going in just like Daddy to get it cut. With three daughters with long curly hair I spend enough time already combing out heads of hair every morning. Although he did have sweet curls as a baby...

Anyway, I'd do what you want. If it starts bothering him he'll let you know.

He is a cutie and that is beautiful hair! But personally I think boys should look like boys (short hair)... and girls should look like girls (medium to long hair). Not everyone feels that way these days of course. :)

Who cares what anyone says? He likes it, you like it, WAY better than the mullet rat tail thing my husband had going on as a kid...do what you feel mama :)