"A smooth sea never made a skillful sailor"

I haven't blogged in a while. Between my husband's boat schedule and then a series of crappy events, life has been in a bit of a tailspin. In other words, shit hit the fan.

My husband's boat started going to sea, so he had been gone and then between underways while he was helping me "winterize" the back patio in preparation of him being gone most of he Fall and Winter, he dropped a gutter stone (the large, HEAVY stone thing used to direct water flow under a gutter) on his foot while moving it (August 31st). His foot was originally thought to have been broken, but they later determined it was not. It was however very badly hurt with deep contusions. This injury prevented him from leaving for the next underway with the sub. The tentative plan was to fly him out to a scheduled port call if it was healed enough to do so. My husband being the man that he is, with the incredible work ethic he has and the pride he has in his job, was pushing himself hard to make that happen.

One week after crushing his foot, he took a terrible fall down the stairs (September 7th). Really terrible. I found him unconscious on the bottom landing after hearing him fall while I was sitting on the front porch (he is roughly 6'2" and 240lbs. It was loud!). I called 911. When he came to, he was very disoriented and had no recall whatsoever. He'd ask what happened and when I finished telling him that he fell, he'd ask again. It was seriously that bad. (2016 update: Some significant things that had happened onboard the sub came to light after this and that definitely contributed to his brain injury.)

When the EMTs, police, duty chief on base and whoever else showed up, he was still on the stairs and in tough shape. They were asking him what day it was, what year it was, how old he is, his birth date, who the president is etc. He wasn't able to answer any of it. He did remember me and the kids. He couldn't remember the kids names or ages, but he remembered we have 6 of them. He kept asking them over and over what happened, the same as he did with me. He also kept asking if the kids and I were okay. It was really scary to see. At one point I had left his side to answer questions, you know, because they had to make sure he wasn't drunk or on something that could have impaired him and caused him to fall (which he wasn't, for the record). When I wasn't by his side to reassure him repeatedly that the kids and I were okay, he started crying and panicking. He was on the stretcher at that point. That was the one moment I almost broke down. In the ambulance he was asking if we were in a car accident and started asking again where the kids and I were and if we were okay. I was sitting up in the cab of the ambulance with the driver (I wasn't allowed in the back with him, so they could fully asses him) and I could hear his repetitive questions, sporadic crying and confusion.

::Side Note:: I am so incredibly fortunate to have the friends/neighbors that I do. Several of them were over here to help in an instant. One followed the ambulance to the hospital to be with me, while others were here to stay at the house with the children. It was amazing. 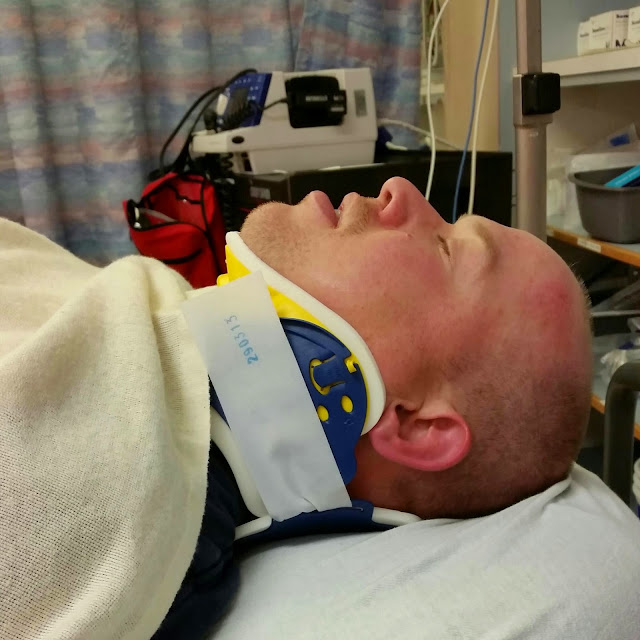 The amnesia and disorientation persisted for roughly 5 hours at the hospital. During that time my husband had a CT scan, chest x-ray and was vomiting from the head trauma. He began to become more aware and remembering basic things like his name, age, year etc. The Dr. was originally going to keep him, but since there was no bleeding in his brain, they discharged him early in the morning with the diagnosis of a Severe Concussion and Cervical Strain.

So here we were. An injured foot and an injured brain. At that point he was still on crutches. He slept that entire next day after the fall. The one person from the boat who we saw that day was pretty insensitive and rude. They were going out to sea the next day and he had to check into his temporary assignment. The weeks that followed consisted of me driving him to and from different places on the base. Dr. appointments, squadron (where was was temporarily attached to) etc. It quickly became apparent that his symptoms from the head injury were not resolving themselves and he was referred to the Neurologist on base at the TBI clinic. To this day, he still had no memory of the day he fell or the day after. So we don't actually know what happened. We just know he landed right on his head, hard.

He was diagnosed with a moderate-severe (basically on the high end of moderate) TBI. Traumatic Brain Injury.... that is one of those things I always associated in my mind with war. Bombs, bullets, that kind of thing. The Dr. put it into perspective for me. A closed head injury caused by blunt force trauma is the same on the inside. The brain still slams around and sustains injury whether it was a car accident, a fall or the force from a bomb. This was also my husband's 4th or 5th head injury, between football in high school, his bad accident in 2005 and slamming his head working in the sub. That increases the potential for it to be more serious and cause permanent damage.

We have since been learning, as a family, to adjust to the pretty prodigious impact it has on his daily life and ours. I have learned so much about TBI. I wish I had educated myself when I knew others who were dealing with it. There is just so much I didn't know and didn't realize. The symptoms.. oh the symptoms. With the TBI came hurtful rejection by people who he thought were friends, rumors on the sub he was on and all of the TBI related symptoms. But together we are learning, adjusting and pushing forward as a family. We're working through a huge host of symptoms from seizure activity, to anxiety, to cognitive impairment. He participated in a 4 week long program for TBI and PTSD and is under continued care of the Neurologist and some other medical professionals. I guess we'll see what other diagnosis we face as time goes on. Perhaps I'll even make it a point to continue to blog about it.

Oh but wait... there's more. On Halloween, after coming home from taking my husband to have an EEG done, I stepped out the front door, rolled my ankle hard and broke my foot. I BROKE MY DAMN FOOT just walking out the front door! Rolling my ankle broke the base of my 5th metatarsal on my right foot. Did I mention it's my RIGHT FOOT? So I can't drive either.

We have Tony's recovery which is a huge thing, Wyatt's ongoing issues we're seeing a new urologist for, Cameron needing to see a new allergist, Alex's quarterly endo visits and now me needing to be under ortho care for my foot. We just have all sorts of excitement going on around here. I'm anxiously awaiting some good things to come our way. I guess we'll just look at it as becoming some real skillful sailors in this sea of life.

You bet your booty I sage smudged this freaking house this past week when I was able to hobble around enough to do so.

"A smooth sea never made a skillful sailor."