For those who are fortunate enough not to have sustained a very severe traumatic brain injury and do not have any outwardly obvious physical disabilities, there are still very tangible struggles.

When someone looks "fine" or "ok" and acts seemingly "normal", it's hard for people on the outside to really comprehend the struggles they are facing on the inside. I'll admit, it's even hard for me, the very patient and understanding spouse of a man with a moderate TBI to understand some days. And some days, truthfully, it's exhausting.

Only those who are the closest to them, really see the daily obstacles. Those on the outside have difficulty seeing past the initial observation. I have helped my husband through seizures. I have watched light-hearted conversation with friends or family take every bit out of him and him need to sleep after. I've watched him fight to hold it together while the normal daily workings of our household start to overwhelm him. I've watched crippling anxiety prevent him from being able to watch our daughter open her gifts at her 5th birthday party or seeing someone at the store sending him into a full blown anxiety attack and having to go right home. I've ridden the daily emotional roller coaster with him. I've held him through some really low, lows. I'm there to constantly remind of him things he can't remember... I'm kind of like his right leg. He could live without me and get by ok, but having me here to lean on makes it a whole lot easier to keep walking.

Whether we want to admit it or not, Traumatic Brain Injury affects our daily life, in more ways than one. From daily tasks to relationships. We all just keep on pushing forward though. In the ideal setting, such as the TBI program my husband was part of, everyone gets it. They understand that there is so much more beneath the surface. So much more. However, in the real world, there are individuals walking around recovering from brain injuries all around us and we don't even realize it. They have to navigate a brash, impatient, unsympathetic world, while appearing to be "normal", all while dealing with a brain that has it's wires crossed. There is no magic pill to just make it all start working right.

I think one of the most frustrating things for both survivors and caregivers is when people say "He looks just fine." or "She looks like she is all better now." Looking fine or better on the outside is not an accurate reflection of what's going on, on the inside. For me, I take comments like that very personally, because my children and I are here experiencing the daily struggles along with him. I feel that it not only minimizes what he is going through, but it minimizes what we are going through as well. This certainly isn't an easy road to walk for any of us. People see the smiling, maybe even upbeat man they are having a short conversation with, but what they don't see is the anxiety, sensory overload and often emotional unraveling that comes after. It's like he's holding his breath and just waiting until the conversation is over to relax and breathe. It's an inner struggle, which I imagine is partly comprised of pride, that makes him force a certain appearance with most people. Those who are the closest can see subtle differences despite that, but most others, don't.

My husband is still who he was... but he isn't. Some days I see a beautiful glimpse of our "old normal", but our "new normal" is what we are living with and we have come to terms with that. We appreciate the moments when he is able to be a little like his old self though. Even if it's something as little as getting through a shopping trip without having to leave abruptly because of anxiety or sensory overload. That little thing, is actually really significant to us. We definitely stay home more. He needs naps almost daily. He forgets things every day. He's here though, and mostly healthy. For that I am thankful.

Traumatic Brain Injury in the real world, to put it frankly, freaking sucks. The survivors need to know there ARE those of us who care and understand. All of us right legs... well, we kind of need that too.

2014 was not a good year for us. The last 3 years haven't been great because, well... Rotten Groton, Sea Duty and shitty people. But 2014 took the cake for being the worst. Our experiences this last year have taught us a lot about people, trust, relationships, betrayal and many other things. It has also made us realize just how solid we are as a family.

The year started, much like the last few, with my husband's presence being very scarce. His boat was preparing to go to sea, looming inspections, high level Navy visits and testing. Lots of stress from that angle, but nothing we haven't experienced before. It is the Navy after all.

Early in the year Wyatt had surgery.

We had our first child with stitches.

Declan swallowed his sister's little diary keys, while my husband was gone.

My mom almost died in the hospital.

Toward the end of the summer my husband accidentally crushed his foot.

A week after hurting his foot, my husband sustained a TBI.

We lost a large chunk of my husband's paycheck each month abruptly, due to him going on Limited Duty because of his injury.

On Halloween, I broke my foot. The base of my 5th metatarsal to be exact.

Friends have faded away.

Our dryer died last week and has yet to be fixed.

And more... but I suppose this stuff was the most notable.

My husband's TBI has changed everything and has dominated most of our life the last 4 months. This is something we'll be dealing with for a very long time and we are accepting that. This last year has tested us many times. We have persevered and we will continue to persevere. We are strong and only get stronger.

I have an amazing family. My children are amazing. My husband is amazing. The small group of friends who have stuck around through the tough times are incredible. 2015 has to be better. It WILL be better. We don't know what this year will bring as far as my husband's career or his recovery, but I do know good things have to be coming our way. You have to have the rain, to get the rainbow. We're just waiting or our rainbow. 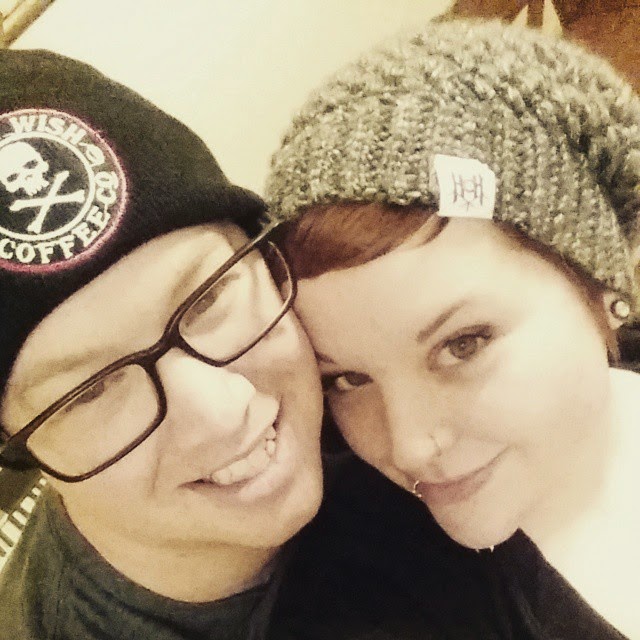